9/12/20
Sports – It was an action-filled evening last night at Herndon Stadium in Hart County where the Warriors fought hard to a victory over the Bulldogs 50 to 47.

The Warriors were off to an early lead in the first quarter, using a fumble by the Bulldogs to place their first points on the scoreboard within ten minutes of gameplay, only to have Hart County respond in kind with seven points of their own just nine minutes later. In ten more minutes another fumble by Hart County would lead to another quick touchdown by the Warriors after a great catch by Cooper Turner to allow J Ben Haynes a run into the end zone on the next play.

Still in the first half of the game, Darius Cannon would intercept a Bulldogs pass for the 3rd turnover leading to yet another quick touchdown by your White County Warriors. But the Bulldogs were determined and placed 14 more points on the board before halftime, ending the first half tied at 21.

The second half was a back and forth with Hart County taking the lead until Andrew Pierce recovered his own return kick allowing for a quick touchdown bringing the Warriors to only one point ahead of the Bulldogs with just under four minutes to play. Hart County were able to quickly place another six points up and with only 3 minutes left, and it seemed the Warriors would fall only five points behind. But determined to show their Warrior spirit, J Ben Haynes slid in for another White County touchdown, and a two-point conversion would place them ahead. The Bulldogs fought back quickly making for an excited Drew Harris and Warrior crowd.

Your final score for the evening would be 50 to 47, Warriors. The Captain D’s players of the game were Jessie Moose on Defense and the entire Offensive Line. Next week, the Warriors are at home versus Pickens County. 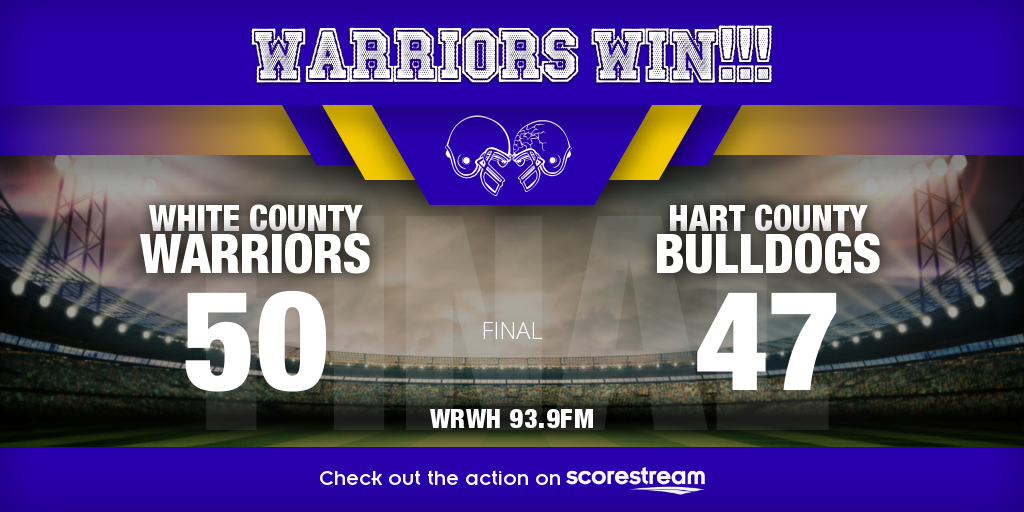