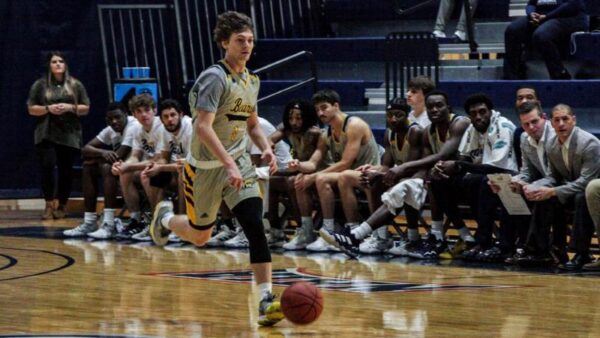 (GRAYSON, Ky.) – The Truett McConnell University men’s basketball team traveled for an Appalachian Athletic Conference match-up against Kentucky Christian University, where a strong first half from the Bears proved not enough against the Knights strong offensive second half (56-63). TMU falls to a record of 6-10, 4-8 AAC, while the Knights rise to 4-13, 4-9 AAC.

PLAY BY PLAY
The Bears had back-to-back shots in the paint from Enocka Franky and EJ Smith to capture an early lead. The Knights were quick to respond, but a three-point shot from Brent Kelly continued to spark the Bears momentum. Multiple shots from the Knights created a large margin, while three consecutive shots from Raul Arias-Ortega and two free throws from Smith cut the deficit. A pivotal layup from Kelly recaptured the Bear’s lead, followed by a layup from Cory Seitz and a three-point shot from Cooper Rubio. A layup and free-throw combo from CJ Brown sent the Bears into the half with a 33-27 lead.

UP NEXT
The Bears return to the Benjamin F. Brady Arena to host AAC foe, St. Andrews University, on Wednesday, January 11. Tip-off is set for 7:30 p.m.