No. 15 North Georgia Dispatches Lander in Bounce Back Victory 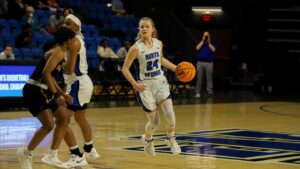 GREENWOOD, S.C. ­– Caroline Martin helped the No. 15 University of North Georgia women’s basketball team find its groove in a 76-66 win over Lander in their road Peach Belt Conference matchup. Martin tallied 25 points, adding nine rebounds, three assists, and three steals. The Nighthawks were able to answer after a hot start shooting for Lander in the first half threatened an upset.

Kayla Massop finished second on the team in scoring with 15 points and led the team on the glass with 12 rebounds, recording her second consecutive double-double. Josie Earnhardt made four of UNG’s seven three-point made field goals, with Martin making the other three. Earnhardt finished with 14 points in the game. Carly Fahey continued to find her teammates recording seven assists in the game.

The Nighthawks return home to Lynn Cottrell Arena at the UNG Convocation Center for a midweek matchup versus Clayton State on Wednesday (Jan. 11) at 5:30 p.m.