No. 16 North Georgia Fights Past Clayton State for PBC Win 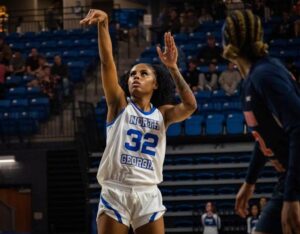 (DAHLONEGA) – A career night for Kayla Massop helped the No. 16 University of North Georgia women’s basketball team defeat Clayton State, 80-71, in their Peach Belt Conference victory over the Lakers in Lynn Cottrell Arena at the UNG Convocation Center. Massop finished with a career-high in rebounds (19) and assists (7) and recorded her third consecutive double-double by scoring 14 points.

Massop secured her double-double by the halftime break while the Nighthawks held a 14-point advantage. UNG struggled in the third quarter but answered in the fourth to pull away. Kaylee Sticker also recorded a double-double, finishing with 10 points and 10 rebounds. Four Nighthawks finished in double-digit scoring, with Caroline Martin leading the way with 20 points. Josie Earnhardt finished third in scoring with 13 points, making three of her four attempts from beyond the arc.

North Georgia moves to 12-2 on the season, and 4-1 in the Peach Belt Conference play.