Downed Trees And Possible Power Outages With The Next Weather System 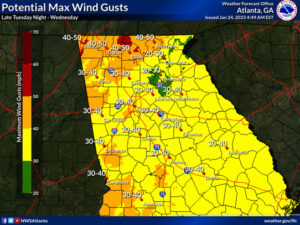 (Cleveland)-A predicted strong storm system during the next 24-48 hours will bring an increased risk for showers and embedded thunderstorms in Georgia, that could produce damaging wind gusts as well as strong, gusty winds outside of any showers and thunderstorms beginning late tonight (Tuesday) and persisting into early Wednesday afternoon.

The National Weather Service released the following information about the approaching storm system:

Here are the highlights as of this morning (Tuesday, 1/24):