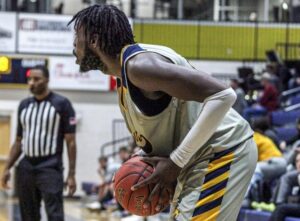 (CLEVELAND) – The Truett McConnell University men’s basketball team hosted Appalachian Athletic Conference foe St. Andrews University, where the Bears bested the Knights in nail-biting fashion (72-71). TMU rises to a record of 7-10, 5-8 AAC, while the Knights fall to a record of 1-14, 0-13 AAC.

The Bears were explosive from the start with a dunk from Kafunba Toure to give TMU an early lead, where the Knights responded with multiple shots of their own. Layups from Raul Arias-Ortega and Akil Covington cut the deficit to three points. Clutch layups from Covington and Cory Seitz recaptured the Bear’s lead, followed by a three-point shot from Covington to propel TMU forward. Both teams were evenly matched until a clutch layup from Brent Kelly turned the tide for the Bears. A shot behind the three-point arc from Cooper Rubio and free throws from Kafunba Toure sent TMU into the half with a 37-31 lead.

In the second half, the Bears quickly added to their lead with a three-point shot from Kelly, paired with a layup from EJ Smith. The Knights were quick to cut the deficit to two points when a layup from CJ Brown secured TMU’s lead. The Knights stole the lead and shot forward with shots of their own. A shot in the paint from Smith and Brown chipped away at the margin, where a timely jump shot from Arias-Ortega recaptured the Bear’s lead. Both teams were neck-and-neck when a game-winning shot in the paint from Kelly secured a 72-71 victory.

UP NEXT
The Bears hits the road to Milligan College, Tennessee on Saturday, January 14 for an AAC show-down against Milligan University. Tip-off is set for 4:00 p.m.