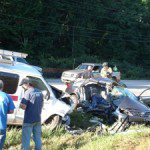 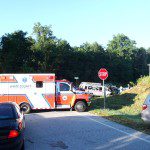 (CLEVELAND) – Two youths had to be flown from the scene of a two-vehicle wreck west of Cleveland Wednesday morning.

According to the Georgia State Patrol, a 2013 Toyota Corolla driven by 33-year-old Brandy Sutton of Cleveland was traveling east on Georgia Highway 115, merged into the turn lane and was attempting to make a left turn onto Tesnatee Gap Valley Road.A 1997 Ford Econoline van was traveling west on Georgia 115 and struck the passenger side of the car, a GSP spokesman said.The resulting collision trapped the occupants of the car.

Kelsey Grimsley, 14,  of Cleveland was in the front passenger seat, and Jealan Grimsley, 12, of Cleveland was in the back right seat, the spokesman said. Firefighters had to remove both passenger-side doors to access the girls.  “One of the passengers is believed have a broken femur and the other one is believed to have head injuries,” said Sgt. G.R. Harper of GSP Post 6 in Gainesville.Sun shining in Sutton’s eyes was listed as a contributing factor in the wreck.Sutton was injured and was taken by ambulance to Northeast Georgia Medical Center in Gainesville, Harper said.The driver of the van had minor injuries and was not transported, Harper said.