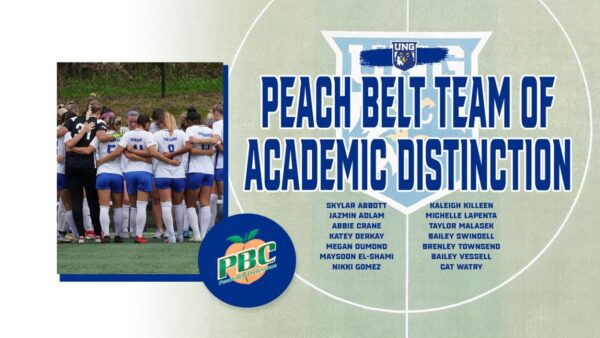 UNG’s 14 was the second most on this season’s 95 player team as Flagler had 16 awardees. Clayton State had 12 honorees with Columbus State one behind with 11. Georgia College, Lander, USC Aiken and Young Harris each had nine players recognized, and Georgia Southwestern rounded out the team with two.

To be eligible for the team, a student-athlete must 1) participate in at least half of his/her team’s events and be either a starter or significant contributor; 2) achieved a 3.30 cumulative grade point average (on a 4.0 scale) and 3) completed at least one full academic year at his or her current institution and has reached sophomore athletic eligibility or be considered a freshman after using the extra year of eligibility granted by the NCAA due to the COVID-19 pandemic. The Peach Belt Conference Sports Information Directors oversee the program, which is presented by Barnes & Noble College.