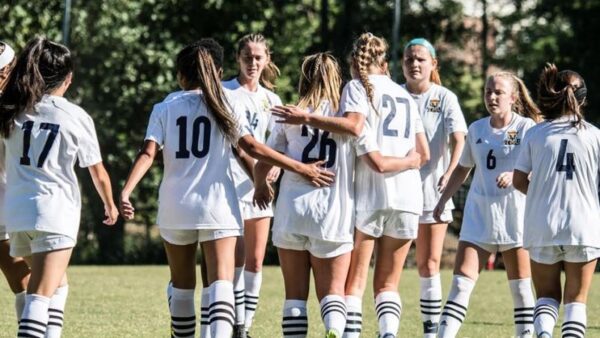 (SPRING ARBOR, Mich.) – On Saturday, the Truett McConnell University women’s soccer team made program history by making it to the finals of the NAIA Women’s Soccer Opening Round. After a tied gae at the half, the No. 3 Lady Bears fell short in overtime to the No. 1 Spring Arbor University, with a final score of 2-1. TMU completed their historical season by breaking the program record for most overall wins in a single season (19-4, 13-1 AAC), along with ranking No. 1 in the NAIA in total shots on goal (288), No. 2 in goals scored (103), No.3 in total shots (498) and No. 4 in total assists (76).

“Wow! What an amazing group of young ladies I have had the privilege of coaching this year,” said Head Coach David McDowell. “They went toe to toe with the #3 team in the nation today and showed how good they really are, but they also have shown their quality in their character and resiliency. They are an inspiring group of the most wonderful and gracious people I know.”

“It’s a really tough way to end the game as well as the season, as we had battled and fought the whole game. I couldn’t have asked for anything more from them. They have done themselves and our university proud. I am also so grateful for my staff here. Coaches Britt, Monday and Charles do all the hard work and I am blessed to work alongside them.”

PLAY-BY-PLAY
From the start of the first half, the Lady Bears were forced to work from behind, after Spring Arbor struck first in the 16th minute (0-1). TMU did not hesitate to retaliate, with an Eliska Dvorakova shot on goal and an earned corner kick. In the 28th minute, a ball from Sydney League found the foot of Hannah Logue to put the Lady Bears on the board and even the play (1-1). The remainder of the half saw TMU working hard on defense, refusing to allow Spring Arbor the chance of stealing the lead.

At the beginning of the second half, the Cougars were quick to strike with a shots on goal, along with earning multiple corner kicks. The Lady Bears did not back down, ultimately pushing the game into overtime. The overtime period saw the Cougars continue to be aggressive, forcing TMU to work hard on defense, and with three minutes remaining, Spring Arbor stole the win with a final score of 1-2.

LEADERS
Most notable, goalie Emelie Taylor recorded a career high of 14 saves, totaling 53 on the season. Logue led the way on offense with one goal, while League had a single assist. Dvorakova had two shots on goal and Ashley Johnson had one shot on goal.