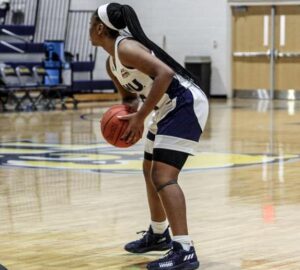 (WEST POINT) – The Truett McConnell University women’s basketball team traveled to face Appalachian Athletic Conference member Point University, where the Lady Bears were unable to respond to the Skyhawks’ offensive second half (29-48). TMU falls to a record of 5-13, 4-11 AAC, while the Skyhawks rise to 12-6, 10-4 AAC.

PLAY BY PLAY
The Lady Bears were first on the board with a three-point shot from Alysee Dobbs, followed by a layup from Quan Holton to collect an early lead. The Skyhawks responded with shots of their own to steal the lead and created a large deficit. Back-to-back layups from Kacie Williams and Jordyn Wilder sent TMU into the second quarter trailing, 11-15. In the second quarter, the Lady Bears were hot out of the gates with a shot in the point from Faith Lovejoy and a layup from Camilla Callihan to tie the game. A clutch three-pointer Dobbs kept both teams evenly matched until the Skyhawks broke away with shots of their own. A layup from Callihan cut the deficit and sent TMU into the half trailing by three points (20-23).

In the third quarter, the Skyhawks were aggressive from the start and added to their lead. The Lady Bears saw a free throw from Holton and Callihan, sending TMU into the final quarter (22-39). In the fourth quarter, the Skyhawks continued to add to their lead when a three-point shot from Tia Shelton and a layup from Callihan worked to minimize the deficit. A final shot in the paint from Lovejoy was ultimately not enough, leaving the Lady Bears to fall 29-48.

UP NEXT
The Lady Bears remain on the road on Saturday, January 21, for an AAC match-up against Brenau University. Tip-off is set for 2:00 p.m.