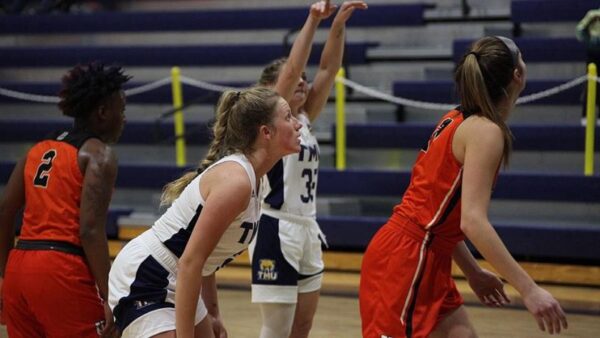 (BARBOURVILLE, Ky.)- The Truett McConnell University women’s basketball team traveled to face Appalachian Athletic Conference competitor, Union College, where the Lady Bears bested the Bulldogs for the second time this season by breaking their eight game win streak with a final score of 62-61. TMU rose to a record of 9-7, 6-5 AAC, while Union fell to a record of 11-4, 6-4 AAC.

PLAY-BY-PLAY
The Bulldogs were the first to hit the board in quarter one, but TMU quickly gained speed to secure the lead after two Re’Tavia Floyd three pointers (13-6). A Camilla Callihan shot in the paint sent the Lady Bears into quarter two up 20-13, while Union fought back, capable of evening the score at the half (25-25).

Both teams were neck and neck for the entire third quarter until the Bulldogs broke away with the lead (41-46). The Lady Bears did not give in as they stole back the lead after another Floyd shot at the three-point arc, followed by a shot in the paint by Alysee Dobbs (57-54). Union was capable of getting up by one with 23 seconds left on the clock, but the game was clinched after a final second shot from Floyd earned TMU their second straight AAC victory (62-61).

UP NEXT
The Lady Bears game against Reinhardt University on Tuesday, Jan. 11, has been postponed. TMU will hit the road to face Tennessee Wesleyan University Thursday, Jan. 13, with tipoff set for 5:30 p.m.