Helen – Several agencies came together Friday evening for a challenging rescue of a woman who had fallen in the area of Raven Cliff Falls, according to an email statement from White County Public Safety Director, David Murphy.

Murphy said that White County Fire Services responded to Raven Cliff Falls on Friday evening at approximately 5:20 pm, where rescue personnel located a female patient who had fallen and was lodged approximately 40 to 50 feet down and about 100 feet up from the bottom of a waterfall. The woman was lodged in a very narrow area where the rock faces of the falls came together.

Two rescuers ascended down to the patient and began working shortly after 6:50 pm. The Georgia State Patrol lowered 2 members from Cobb County GSAR, the Georgia Search & Rescue team in to assist rescuers. Members from Gainesville’s GSAR Task Force 1 team and the Rabun County TRT (Technical Rescue Team) also responded to the scene to assist due to the dangerous terrain and extreme technicality of the call.

Rescue personnel worked tirelessly and the patient was freed from the rock crevice at 11:16 pm.  The patient was then lifted to the top of the falls at 11:42 by rope personnel and evaluated by EMS personnel. 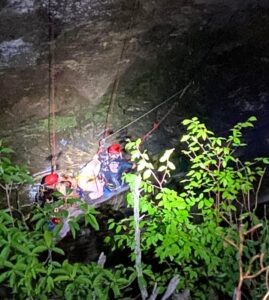 The woman only received minor injuries. Rescue crews remained on the scene until approximately 3:30 am cleaning up rescue supplies and getting all personnel and equipment off of the mountain.

Murphy said, White County Public Safety would like to add a special thank you to the following agencies who assisted in making this rescue mission successful. With their help, we were able to obtain the best possible outcome for the patient and rescue personnel: