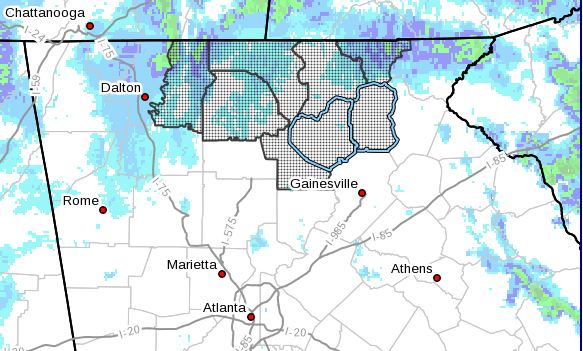 (Cleveland)- The National Weather Service has canceled the Winter Storm Warning for north Georgia and replaced it with a WINTER WEATHER ADVISORY that is in effect until  7 PM this evening.

Forecasters say wet snow is expected with additional snow accumulations of up to one inch, especially at higher elevations.

You should plan on slippery road conditions in some areas. The hazardous conditions could impact the evening commute.

Subfreezing temperatures tonight into Saturday morning could result in re-freezing of any residual water or snow on roadways.

Earlier today White County Public Safety Director David Murphy said there were no issues with roadways, even in the higher elevations. Murphy said teams have reported light accumulations on the mountain tops and ridges along the county line and into Blairsville, Hiawassee, and Clayton.

Murphy says surface temperatures in the lower elevations of Cleveland, and just south of Helen will remain above freezing or just at freezing during the morning.  By afternoon temperatures will reach 35-38 degrees until sundown, and moisture should be well out of our area.