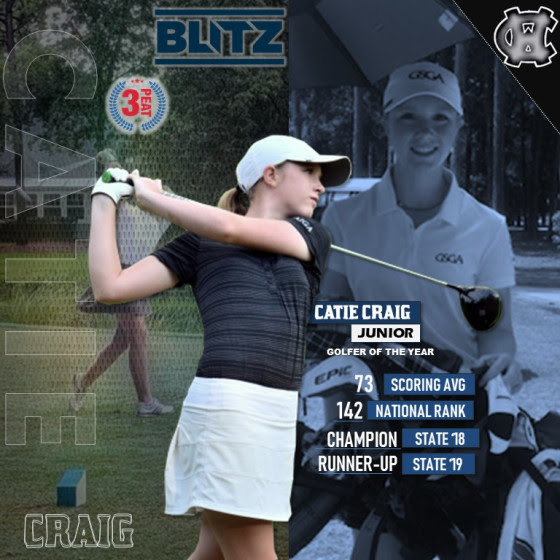 (Cleveland)- White County’s Catie Craig has been selected as Blitz Sports Girls Golfer of the year. Here is what Blitz had to say: https://blitzsportsga.com/2020/05/09/catie-craig-poy/

It’s a 3-PEAT for Catie Craig of White County in laying claim to BLITZ Golfer of the Year honors. The crazy part is that she has a chance to come back and do it again next year, which would be a first. It’s crazier that a Craig (Catie or sister Caroline) have owned this award since 2017.

The Lady Warriors phenom didn’t get a chance to really show her progress this year due to COVID. Still, she’s ranked nationally at #142 and we think that’s being a bit harsh. The former state champion has another shot next year to win another trophy, and plenty of low medalist honors.

Voting for Player of the Year is performed by an internal voting panel consisting of mostly local sports reporters, as well as a small group of former officials, former players, and former coaches. The panel ranks the finalists in order, producing a Heisman-style voting point total.

HISTORY OF GOLFER OF THE YEAR

Catie Craig keeps the streak going. Since 2017, either her or her sister (or both in 2018) have claimed the award. Catie becomes the first since Madison Caldwell (Dawson) to 3-peat. She now can come back and win it next year, which would be a first.

LOOKING AHEAD – THE NEXT FAVORITE

Obviously Craig has the inside track. However, nipping on her heels is the dynamic Tallulah Falls duo of Brinson Hall and Maggie Jackson, who both will also be seniors next year. The same can be said for Cameron Ford (Commerce) and Ellie Kinlaw (Jefferson sophomore). Wide-open next year, and perhaps the best result at state will take the Golfer of the Year award.

UNG’s Men’s Soccer Falls in Final Seconds to No. 2 Young Harris in Overtime