Sports – It has taken three region games but the Warriors finally have a check mark in the win column in regional play, and it was an important victory for play-off possibilities and a large margin win.

White County was in Oakwood last night up against West Hall last night in region play. The first quarter was slow paced with only one touchdown, but importantly, that touchdown belonged to White County.

The points scored doubled for the Warriors in the second quarter as Bryson Cronic and Silas Mulligan would each put a touchdown on the board, all while holding back the Spartans and ending the first half up 21 to 0.

After an extended halftime for West Hall Homecoming, both teams took the field, and the Warriors went back to business with two more touchdowns, including a 63-yard run from Darius Canon. Drew Harris and Garrett Rowland called the play action: 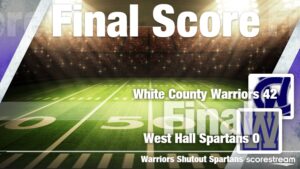 White County up by 35 points meant a running clock in the 4th quarter, and one more touchdown for the Warriors would seal the game, as the win belonged to the Warriors in a shutout victory 42 to 0.

White County will be off next week, but will be away the following Friday to take on Lumpkin County in region play.

UGA in action today, going up against Auburn. Pregame show begins at 11:30am with kick off at 3:30 with all the action live here on your home of the Warriors and the Bulldogs, WRWH.