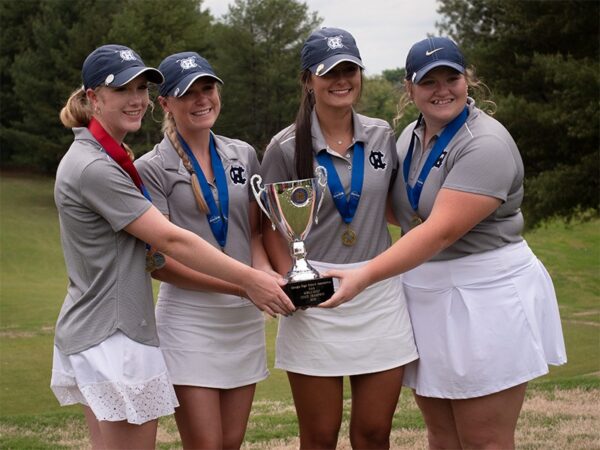 (CLARKESVILLE) — Both the North Hall and White County girls teams came away with a championship on Tuesday at the Class 3A golf championships at Apple Mountain Golf Course.

The Lady Trojans won the individual battle as senior Mikayla Dubnik captured the individual title with a blistering two-day 4-under total 140, holding off the Lady Warriors’ senior Catie Craig, who shot a 1-over 145 to take second.

It was the second consecutive second-place showing for North Hall, who also took runner-up status in 2019.

“These girls have played together and worked so hard since the eighth grade. They deserve everything they have accomplished” White County coach Darrell Dorsey said. “We only beat North Hall by two strokes in the Area Tournament and I expected a similar tournament here. But our No. 2 (Erin Dorsey) and No. 3 (Rylee Adams) players both had personal bests over the two days. That was the difference in getting some separation.”

Dorsey shot a personal-best 77 in Tuesday’s second round to finish at 19-over 163, good for eighth overall. Adams finished ninth with a 20-over 164 after a final round 81, which beat her previous personal-best 83 on Monday.

North Hall’s next best individual finish was by senior Lyric Sanford, who finished 15th with a 35-over 179.

As for the duel for the individual title, Dubnik fired a 3-under 69 to break a Day 1 tie with Craig and finished at 4-under 140. Craig struggled for a 2-over 74 on Tuesday but still finished second with a 145 to hold off Kyra Dube of Westminster (151).

With the championship, Dubnik now has titles in two states after winning a title in Alabama as a freshman.

“It was a close match with Catie both days,” Dubnik said. “It was very nerve-wracking at times. But I was able to calm down and make some shots.

“It feels great to win it. This has been my goal since I came back here. But it’s also pretty cool that we have two area teams to finish at the top.”

“I think it’s great for the area to have two teams at the top,” Dorsey said. “It was a good battle both days.”