It was a somber night at Warrior field last night as the Warriors lost the battle against Habersham Central, 21 to 12. 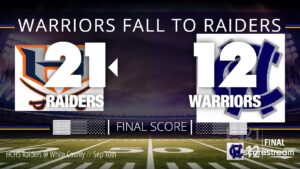 The Raiders would book-end the long first quarter, as early into the game, it would be a White County fumble that would hand the first touchdown over to Habersham Central. Then with 46 seconds left in the first, Habersham would close the quarter out with one more touchdown, giving the Raiders a 14 to 0 lead going into the second quarter.

Things looked up as Darius Canon would claim the first points for the Warriors, but with White County’s struggle with completion on the extra point kicks, 6 points would be all the Warriors would see in the first half. Even though White County held the Raiders back in the second quarter, Habersham would still hold the lead heading into halftime with a score of 14 to 6.

Two minutes into the third quarter, Habersham’s Colton Turner would bring the Raiders their final touchdown of the game. An interception by Turner would not keep the Warriors from working hard as White County would put up 6 more points before the end of quarter three.

That would be the final points of the game as the fourth remained scoreless and the Raiders would take the win with a final score of 21 to 12.

The Captain D’s players of last night’s game were Teddy Strange on Offense and Silas Mulligan on Defense.
The Warriors will take a much-needed break next week but will return to action for their first region game on the 24th when they will take on Dawson County.

The Bulldogs are in action today going up against the University of Alabama at Birmingham, pregame show starts at 11:30, kick-off at 3:30 pm, and you can hear all your Warrior and Bulldog action right here on your station for North Georgia Sports, WRWH, 93.9fm.