Sports – The Warriors’ ranking fell to 5 and 2 last night as they were unable to hold on to a lead in overtime and failing to beat North Hall, 34 to 31.

White County Senior, J Ben Haynes remains out of play with an injury, but that didn’t stop the Warriors from coming out to a 10 point lead early in the game.  The Trojans weren’t far behind cutting that lead to only 3 points by the end of the quarter. 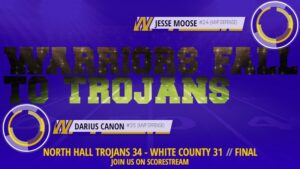 While the score remained within a difference of only one touchdown throughout the game, as the first-half play ended, they would head into half time tied at 17.

It would be the Trojans who would score first in the 3rd quarter and it would remain a back and forth, see-saw game through the second half. And in the 4th quarter, it was Darius Canon and a 73-yard touchdown run to tie the game at 21. Then after the Trojans pulled ahead once again, Darius would put on his running shoes once more with a 77-yard touchdown run with less than 4 minutes left to play, tying the game at 28, and heading into overtime.

A field goal by North Hall in overtime would shut down the Warriors for the evening, with a final score of 34 to 31, Trojans.

This week’s Captain D’s MVPs were Darius Canon and Jesse Moose. Next week the Warriors will be taking on the West Hall Spartans at home.