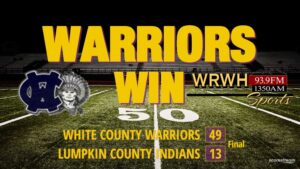 The Warriors were in Lumpkin County last night to take on the Indians and came home with their second region victory.

Things began slowly at the burial grounds in Dahlonega with a scoreless first quarter, but White County was able to break open beginning with a touchdown by Bryson Cronic just three minutes into the second. Things began to move quickly after that with Alex Thornton putting up seven points, followed by a 48-yard touchdown run by Darius Canon. A single touchdown by the Indians would lead into halftime with the Warriors on top 21 to 7.

This was answered by Lumpkin 9 minutes later with a touchdown by the Indians. One more 29-yard touchdown by Silas Mulligan would close out the third, 35 to 13 White County.

The Warriors would hold Lumpkin County to those 13 points for the remainder of the game, all the while continuing their run on the Indians’ end zone. Another touchdown by Cronic and a 29-yard run by Ryan Fowler would close out the game with the Warriors taking the win, 49 to 13.

The Captain D’s players of the game last night were Malachi Zellars on defense and Freshman Tripp Nix on Offense. The Warriors will be at home next week hosting Gilmer County.

No Bulldog game today as UGA is on a Bye week, but college action returns next Saturday as the Dawgs head to Jacksonville to take on the Gators. Catch all your UGA and High School Football action here on your home of the Warriors and the Bulldogs, WRWH 93.9fm.