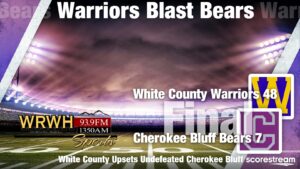 Sports – The Warriors were back to full strength last night, and it showed in the unexpected landslide victory, 48 to 7 over the undefeated region leaders, the Cherokee Bluff Bears.

It was only 5 minutes into the first quarter when J Ben Haynes would throw his first touchdown pass to Darius Cannon, following that up quickly with the recovery of a fumble leading to the second touchdown pass to Cannon, and an early lead for the Warriors. It would be directly following the injury of White County running back Riley Stancil when the Bears were able to get one into the end zone, ending the first quarter 14 to 7.

White County extended their lead before halftime with two interceptions and three more touchdowns. Entering the locker room 34 to 7, Warriors.

As the players returned to the field for the second half it would be Silas Mulligan who would bring home the points for the Warriors with two more touchdowns in the 3rd quarter.

The Bears could do nothing but watch as their chances for an undefeated season vanished as the running clock in the 4th quarter counted down. The Warriors were victorious 48 to 7 and go to 7 and 2 for the season. White County is the number 4 seed in the playoffs, the first game of which will be played next Friday when the Warriors will be on the road to take on the 8 and 1 ranked Rockmart Yellow Jackets.

Your Captain D’s players of the game last night were Cooper Turner and Darius Cannon.

College football in action this afternoon when the Bulldogs will take on Mississippi State at home. The pregame show starts at 3:30 pm with the kickoff at 7:30 here on your home of the Warriors and the Bulldogs, WRWH 93.9fm.