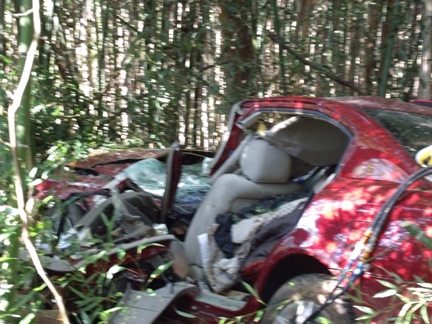 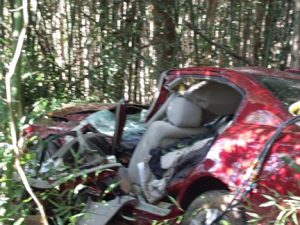 (CLEVELAND) – The Georgia State Patrol has identified the woman airlifted from a White County wreck Tuesday morning.  Cpl. Dallas Van Scoten said he responded to the single-vehicle collision on Georgia 115 West near Kanady Road.   “The red Nissan Altima was being driven by Inderpreet Karu of Marietta,”  Van Scoten said.

“The female driver was approximately 41 years of age.”  Karu’s Nissan was traveling west on Georgia 115, went into the center turn lane and struck the center lane divider, then traveled off the roadway.  According to the trooper, the car then struck a fence on the shoulder of the road, finally striking a tree and rotating off the tree, coming to rest in the wood line.

Van Scoten said,  “The driver was trapped due to the heavy extent of vehicle damage.”

White County emergency personnel extricated the driver and she was flown from the scene to Grady Memorial Hospital in Atlanta.

“The driver was in critical condition at last check,”  Van Scoten said.