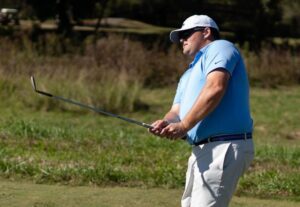 (DEARBORN, Mich.) – The No. 4 University of North Georgia men’s golf team opened its first berth in the NCAA Division II National Championships Monday and are currently in a tie for 10th place after the opening round.

North Georgia shot 16-over to tie with Missouri-St. Louis for the 10th spot, four shots back of Central Missouri, who is in eighth place after 18 holes. Indianapolis shot even-par to lead the tournament by two shots over Barry. Colorado State – Pueblo, Oklahoma Christian and Arkansas Tech round out the top five.

Individually, North Georgia was led by Grant Crowell and Hughes Threlkeld, who each shot 2-over 74 on the round. Crowell had an eagle on the par 4 ninth, the only one of the day on the hole and one of just three on the entire course Monday. Threlkeld scattered three birdies through his round as both he and Crowell are tied for 24th, seven shots off the pace for the individual national championship.