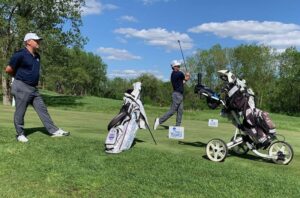 (DEARBORN, Mich.) – The No. 4 University of North Georgia men’s golf team fell to 13th place after the second round of the 2022 NCAA Division II Men’s Golf National Championship Tuesday.

North Georgia shot 309 in the second round and is now at 37-over for the tournament. The Nighthawks are 17 shots out of the medal match play portion of the event.

Individually, Grant Crowell, Evan Thompson and Stephen Kinsel each shot a round of 4-over 76. Crowell had a second eagle on the week, hitting a three on the par-5 seventh. He is the only player in the field with multiple eagles.

The Nighthawks will look to move up the leaderboard early in the day and put pressure on the teams near the cut line when they tee off starting at 9:20 a.m. Wednesday morning. The top eight teams after tomorrow’s round will advance to the medal match play bracket.