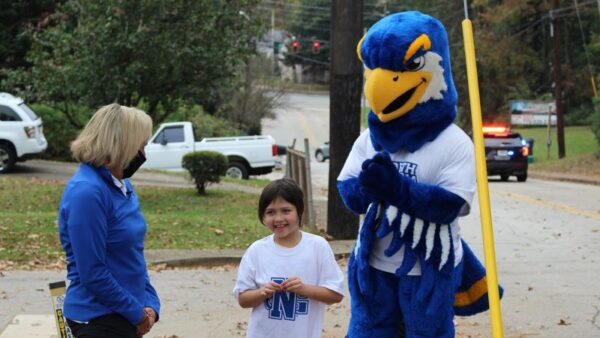 (AUGUSTA) – The University of North Georgia Department of Athletics has been awarded the LeeAnn Noble Make-A-Wish Award for Most Funds Raised for a 12th consecutive year, the Peach Belt Conference announced Thursday as part of the annual awards presentation.

In 2020-21, North Georgia raised $10,841 for the Make-A-Wish program.  UNG also hosted a Make-A-Wish reveal in November as nine-year-old Katie learned she would be getting her wish of a pink princess playhouse.

North Georgia has led NCAA Division II Make-A-Wish giving for five years in a row as the Peach Belt as a conference finished second among all conferences.  Since 2010, Nighthawk Athletics has raised over $195,000 for Make-A-Wish, having raised at least $10,000 in every year since, meaning more than 19 wishes have been granted from the efforts of the Nighthawk Nation.

Young Harris won the Most Improved Award, increasing their giving by over 270 percent since last year.

Division II has raised more than $6.2 million toward granting the wishes of children with life-threatening medical conditions. Almost 740 “wishes” have been granted through Division II contributions. These wishes can serve as a game changer in children’s fights against their illnesses, helping them feel better, and in some cases even get better.

The PBC Make-A-Wish awards were renamed the LeeAnn Noble Make-A-Wish Awards following the 2013-14 season.  Noble was a women’s golfer at the University of North Georgia and former wish recipient from Make-A-Wish.  She appeared on the cover of NCAA Champion Magazine in the fall of 2013 and sadly passed away in March of 2014.  Her dedication to the Make-A-Wish program will live on with these awards that will forever bear her name.