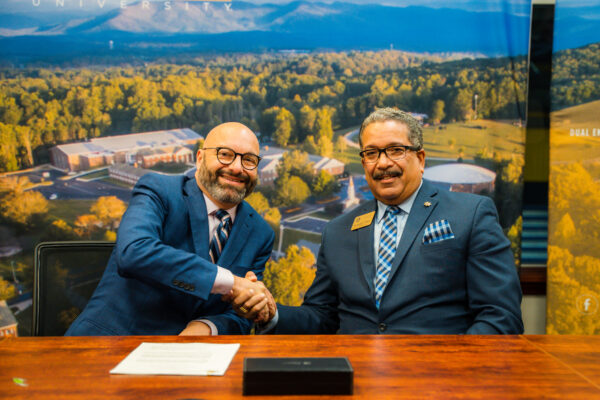 By Jenny Gregory
(Cleveland)- Truett McConnell University (TMU) announced  this week that the institution had signed an
exclusive agreement with the International Conference of Police Chaplains (ICPC), an alliance
providing support to police chaplains, initiating a partnership with the organization.

The ICPC, which was founded in 1973, is an international, professional membership
organization made up of chaplains and liaison officers from different faith groups and law
enforcement agencies. The organization works to train, equip, and encourage chaplains who
provide the availability to the needs of law enforcement officers and victims of crime. The ICPC also
seeks partnerships with other professional organizations and chaplaincy groups which led to the
collaboration with Truett McConnell.

The official signing was finalized by the President of the International Conference of Police
Chaplains, Dr. Ronald J. White. White is a chaplain for several public safety departments in the
Chicago Heights, IL area and a United States Air Force Veteran.

“We must continue our education processes of ICPC to continue to develop and train chaplains.
The relationship between ICPC and Truett McConnell University is the epitome of the
development of law enforcement chaplain educational excellence processes,” said White.
Also in attendance were J. Marie Griffin-Taylor, Dean and Assistant Professor for The Michael
Sattler School of Public Service; President of TMU, Dr. Emir Caner; and Vice President for
Academic Services, Dr. Brad Reynolds.

“By creating this partnership,” she added, “TMU demonstrates its commitment to not just stand
behind law enforcement, but to stand with them and beside them, by providing more chaplains
to help them deal with the sometimes devastating effects of their jobs.”

“It’s a way to give greater access for law enforcement to those who can help them as they help
others.”

###
Jenny Gregory is the Assistant Director for TMU’s Marketing and Communications.