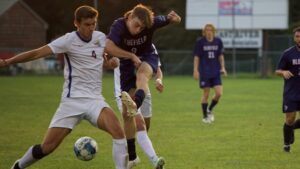 (WALESKA, Ga.) – Daniel Santema of Truett McConnell and Drake Cullens of Bluefield are the Appalachian Athletic Conference (AAC) Men’s Soccer Defensive and Offensive Players of the Week, the league announced on Monday.

This is the fourth edition of the awards for the 2022 season. The next set of awards will be announced on Sept. 26.