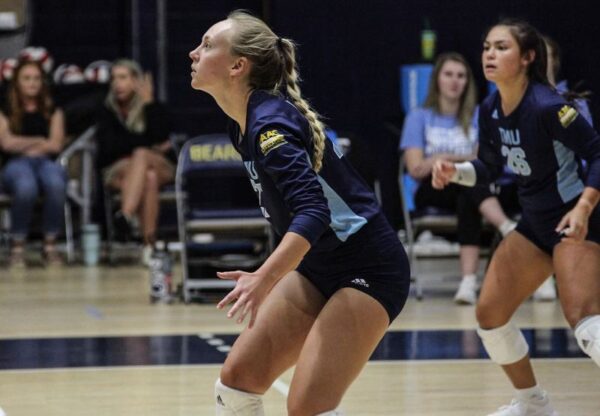 (GAINESVILLE) – The Truett McConnell University women’s volleyball team traveled to face Brenau University for their Appalachian Athletic Conference opener on Thursday night. The Lady Bears battled three tight sets, but ultimately fell to the Golden Tigers with set scores of 25-22, 25-23, 25-20. The Golden Tigers increased to a season record of 4-5, 1-0 AAC, while TMU fell to a record of 2-7, 0-1 AAC.

All three sets saw both teams’ neck and neck. The Lady Bears stole the lead at the beginning of set one off back to back kills from Elizabeth Franklin and Sonya Silecky (3-1). For the remainder of the set, both teams were even in score, until the Golden Tigers took a strong six-point run (17-21). The run was quickly combatted by a TMU four-point run to bridge the gap, but Brenau gained momentum to secure the win in three final points (22-25).

Set two saw the Lady Bears with the lead early due to a six-point run, featuring a Jordan Roberts and Silecky kill (9-4). Once again, the set was even in score up until the final points, which proved successful for the Golden Tigers, due to a final kill to steal the win (23-25). Brenau continued to gain speed as they held the lead for all of set three, but TMU did not back down as they kept the score close in range. A final kill by Ranavia Neal proved the Lady Bears final hope, as the Golden Tigers secured set three with a score of 20-25.

Neal led the way with six kills, followed by senior Bethany Ross and Roberts who had five kills apiece. Silecky had four kills and three digs, while sophomore Rachel Kessler had 13 digs of her own. Junior Brooklynn Brock had nine assists, followed by sophomore Deomi Valmus who had six assists.

The Lady Bears will be back in action inside the TMU Volleyball/Wrestling Arena Saturday, Sept. 11, where they will host Life University and Keiser University. Match times set for 4:00 p.m. and 8:00 p.m.