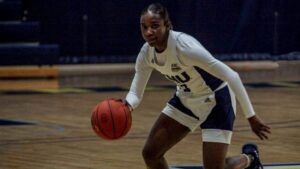 (GRAYSON, Ky.) – The Truett McConnell University women’s basketball team traveled for an Appalachian Athletic Conference match-up against Kentucky Christian University, where a late run from the Lady Bears was no match for the Knights offense (70-91). TMU falls to a record of 3-12, 2-10 AAC, while the Knights rise to 10-6, 7-5 AAC.

PLAY BY PLAY
The Lady Bears were first to score with a shot behind the three-point arc from Tia Shelton. Back-to-back shots in the paint from Alysee Dobbs gave TMU an early lead, but the Knights were persistent with shots of their own. In the second quarter, a layup from Kacie Williams sparked the Lady Bears’ momentum, followed by shots in the paint from Camilla Callihan. Free throws from Faith Lovejoy and Jordyn Wilder paved the way for Dobbs timely three-pointer, sending TMU into the half 23-45.

In the third quarter, layups from Callihan and Williams set the stage for another timely three-point shot from Dobbs. Free throws from Shelton and Dobbs continued to chip away at the lead, while a shot behind the three-point arc from Williams sent TMU into the final quarter, 46-61. In the fourth quarter, the Lady Bears were hot out of the gates with free throws from Dobbs and Callihan, followed by a three-pointer from Sydnie Smith. A shot behind the three-point arc from Shelton paired with two free throws from Wilder gave TMU hope, but the Knights were persistent with shots of their own. A final layup from Lovejoy was ultimately not enough, leaving the Lady Bears to fall 70-91.

UP NEXT
The Lady Bears return to the Benjamin F. Brady Arena to host AAC foe, St. Andrews University, on Wednesday, January 11. Tip-off is set for 5:30 p.m.