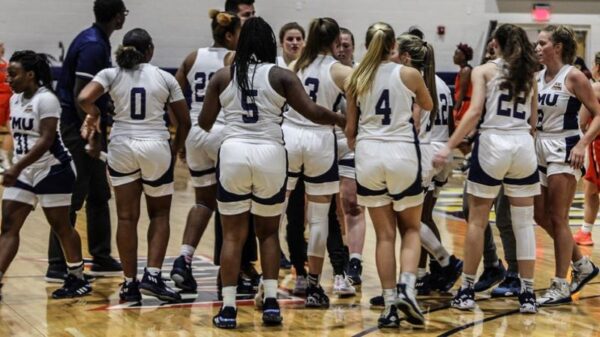 (MONTREAT, N.C. )- The Truett McConnell University women’s basketball team traveled to face Appalachian Athletic Conference competitor, Montreat College, where the Lady Bears clinched their fifth AAC win with a final score of 58-57. TMU improved to a record of 8-7, 5-5 AAC, while the Cavaliers fell to a record of 7-9, 4-7 AAC.

Montreat took an early lead in quarter one, while the Lady Bears worked hard to lessen the gap. A shot in the paint by Alysee Dobbs left TMU down by three going into the second quarter (17-20), while a Re’Tavia Floyd good free throw evened the score (20-20). The score remained close for the remainder of the quarter, but the Cavaliers held the lead at the half (26-30).

The third quarter saw a gain in momentum as the Lady Bears stole the lead after a shot in the paint by Quan Holton (41-39). Floyd added to the lead with a good three-pointer, as TMU entered the fourth and final quarter (44-39). The Lady Bears maintained the upper hand, while the Cavaliers continued to add pressure. With one-minute remining, a clutch Holton three-pointer ultimately secured the victory for TMU, as the game ended with a final score of 58-57.

Camilla Calilhan led the way with 13 points and three rebounds, while Dobbs had 11 points and six rebounds. Floyd collected nine points, six rebounds, and went 3-4 at the free throw line, followed by Holton who had eight points and nine rebounds. Natalie Nixon put up six points of her own, while Jessica Jackson tallied four assists on the evening.

The Lady Bears remain on the road as they travel Saturday, Jan. 8, to face Union College, with tipoff set for 2:00 p.m.