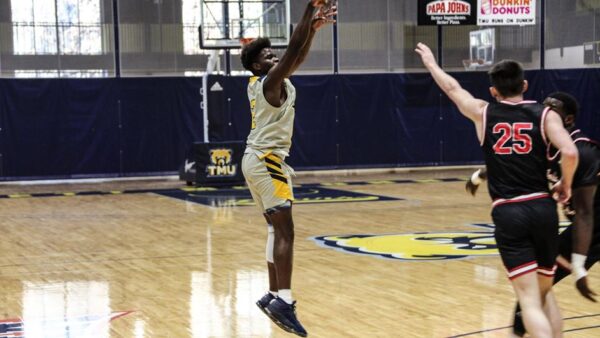 (CLEVELAND) – The Truett McConnell University men’s basketball team competed against University of the Virgin Islands, inside the Benjamin F. Brady Arena. The Bears gained momentum in the second half to secure a 80-60 victory over the Buccaneers, leaving their record to fall 8-5, while the UVI fell 2-9.

PLAY BY PLAY
The score was close the entire first half until a layup from Cory Seitz sparked an 11 point run for TMU, including three consecutive shots in the paint from Enocka Franky (32-21). The Buccaneers worked to lessen the Bears lead but a final shot of the half by Franky left the score 44-30.

The second half saw strong runs by both teams, but two good free throws from EJ Smith put TMU up by 12 (51-39). UVI reduced the lead to four, but the Bears could not be stopped as they reached their largest lead of 14 points after two shots from Brent Kelly at the free throw line. A final shot from the Buccaneers proved not enough as TMU secured a 93-81 victory.

UP NEXT
The Bears will hit the road to face Presbyterian College Thursday, December 30, with tipoff set for 7:00 p.m.