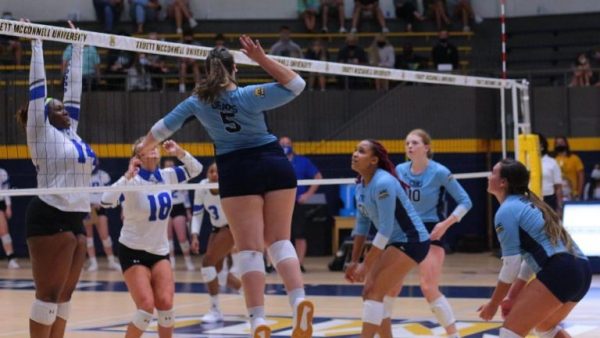 (CLEVELAND) – The Truett McConnell University women’s volleyball team won a nail biter against Tennessee Wesleyan University on Tuesday evening in their season and Appalachian Athletic Conference opener. After falling behind 2-1 through the first three sets, the Lady Bears rallied to take games four and five (25-22, 23-25, 22-25, 25-17, 15-11) to clinch their first win of the season.

TMU started out strong holding a six-point lead three times throughout the first set. Although the Bulldogs crept in from behind late (24-22), freshman Jordan Roberts’ kill sealed the first win of the night (25-22). The second set saw TMU continue leading by as many as six (21-15), however, it was only up from there for TWU. The Bulldogs went on a 7-0 run to tie it up at 22 apiece and eventually clinched the set with three back to back kills (23-25). TWU continued to push and won set three (22-25), but the Lady Bears would bounce back.

A freshman Sonya Silecky kill gave the Lady Bears a large enough lead (14-9) to finish strong. The Lady Bears closed out of the fourth set on a 7-0 run (25-17) and TMU was capable of carrying over the momentum into the fifth and final set. After getting out front by as much as five, a Silecky kill fastened TMU’s first AAC win of the season (15-11).