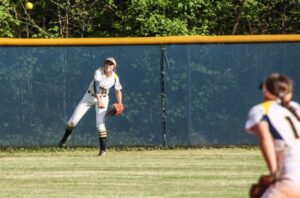 (CLEVELAND) – On Thursday, the Truett McConnell University softball team hosted Georgia Gwinnett College, inside the TMU Softball Complex for their final doubleheader of the regular season. The Lady Bears secured one final split, winning 6-0 in game one and falling 5-14 in game two. TMU finishes the regular season with a 28-23 record, 20-8 AAC.

GAME 1 | 6-0
In game one, TMU was quick to jump on the board with after earned walks by Lexi Simonton, Briley Lawson and Kyndall Gipson walk (1-0). A Rachel Morgan single to right field increased the score to 3-0, giving the Lady Bears a strong lead. The second inning saw a Mikayla Sullens double, followed by a Simonton single and B. Lawson double (5-0) put TMU up by five, while a dominating performance on the mound by pitcher Kyleigh Sanders kept the Grizzlies offense silent. The final run was secured in the bottom of the fifth, with two fielder’s choice and an Ellie Abner walk to load the bases. A Sullens walk secured the final run of the game, securing a 6-0 win.

GAME 2 | 5-14
In game two, the Lady Bears were first to score with a Gipson single, followed by a Justine Kennington single (1-0). Misplayed balls allowed the Grizzlies to score seven runs in the third inning, with one run in the fourth (1-8). TMU fought back with a Kennington single and misplayed balls, followed by a clutch Abner double, scoring two (3-8). A wild pitch led Sullens to score, cutting the score in half (4-8). The top of the fifth saw GGC score four more, making the score 4-12. A final attempt from the Lady Bears saw a Gipson walk, Mattie Brooks single and Morgan single, but was ultimately not enough as TMU fell to the Grizzlies (5-14).

LEADERS
Gipson led the way offensively, going 2-2 at the plate with two runs tallied. Kennington followed, going 2-3 with one RBI and one run. Abner went 1-1 at the plate,  recording two RBIs. B. Lawson was 1-3 at the plate, while Brooks went 1-2.

UP NEXT
The Lady Bears will travel to Kingsport, Tenn. on Tuesday , April 26, sitting at the No. 4 seed for the start of the AAC Conference Tournament. Game time and opponent to be announced.