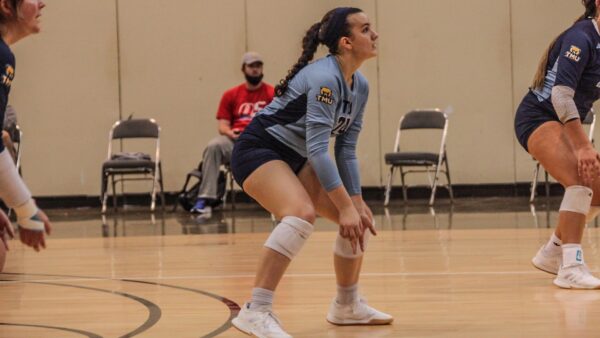 (KINGSPORT, Tenn. ) – After sweeping the quarterfinal match on Wednesday evening, the Truett McConnell University women’s volleyball team lost in four (20-25, 25-21, 21-25, 25-15) to No. 2-seeded Reinhardt University on Thursday afternoon in the semifinals of the Appalachian Athletic Conference Tournament, which concluded the Lady Bears’ historical season. TMU finished with the program’s best-ever record (19-8, 14-5 AAC), while the Eagles advanced to the finals, which they went on to win for the third consecutive year, with a record of 19-5, 17-2 AAC.

Once again, both teams were neck and neck with a tied game at 20-20. A Reinhardt block put the Lady Bears behind (20-21) and the Eagles were ultimately capable of closing out their second win of the day with a 5-1 run (21-25). A 6-0 run by the Eagles put TMU behind by five (7-12) in the fourth set, and the Lady Bears were never capable of recovering as Reinhardt clinched the win to advance to the finals.

Overall, both teams accounted for a total of 52 kills. TMU also had a total of 65 digs, in comparison to Reinhardt’s 57. Senior Abby Maxwell claimed a spot on the All-Tournament team after recording back to back double-doubles on the week. Maxwell concluded her career tallying 47 assists and 13 digs. Neal carried the offense recording a total of 16 kills, while Jordan Roberts followed with 11, Bethany Ross had 10 and Sonya Silecky added nine. Senior Hannah Conners also had 13 digs, while Silecky added 12 and Madyson Dunn had nine. Neal also led with three blocks, while Roberts, Maxwell and Silecky all had two apiece. Rachel Kessler led with three service aces, while Silecky added two.