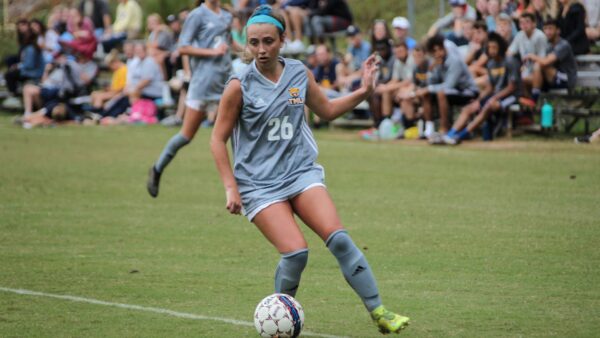 Overall, the Lady Bears outshot the Lions 26-5, with 12 on goal. Additionally, TMU earned a total of five corner kicks, while the Lions earned one.

Hope Kenney put the Lady Bears out front in the first six minutes of the game (1-0), but the freshman found the back of the net once again nine minutes later (2-0) when sophomore Kristin Beasley crossed into her feet. Another freshman, Natalie Alamri, struck from about 25-30 yards out in the 37th minute to score once more for the Lady Bears before the half (3-0).

Despite a three-goal cushion, TMU did not let up. In fact, the Lady Bears took 16 more shots in the second half, while Bryan wasn’t allowed one. On a TMU corner kick, junior Sydney League crossed it into the box, which allowed sophomore Madison Wright to finish TMU’s fourth goal of the evening with a header (4-0), which ultimately proved to put the game out of reach.

In the 72nd minute, senior Ashleigh Smitherman finished off a perfect pass from the feet of freshman Brianna Hernandez (5-0), and sophomore Ashley McCown scored the sixth and final goal of the evening (6-0), which was assisted by junior Allison Sekura, in the 81st minute.

Up next, the Lady Bears are on the road for two more AAC road games at Tennessee Wesleyan University and Columbia International University before returning home to host Milligan College on Saturday, Oct. 17, at 5:00 p.m.