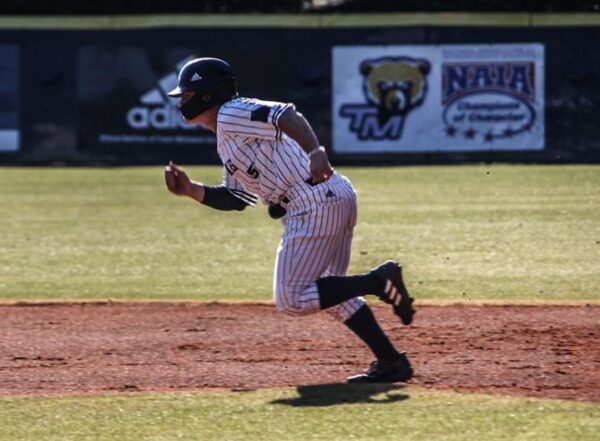 (MILLIGAN COLLEGE, Tenn. ) – On Saturday, the Truett McConnell University baseball team concluded their weekend series against Appalachian Athletic Conference opponent, Milligan University. The Bears lost in heart-breaking fashion in both games, 4-5 (12 innings) and 1-3. TMU falls to a record of 24-19, 15-12 AAC, while the Buffaloes improve to 34-16, 19-8 AAC.

GAME 1 | 4-5
In game one, the Buffaloes were first to score with three runs in the bottom of the second inning (0-3). The Bears responded with a Matthew Redmond double, followed by a sacrifice bunt from Tanner Griffith. Isaak Mullanack singled up the middle to give TMU its first run (1-3). Both teams were evenly matched until TMU saw another run in the top of the sixth. A Mikal Mascarello walk, followed by a Mullanack single put runners in scoring position. A Jake Edwards single raised the score to 2-3. A Buffalo homerun in the sixth made the score 2-4, but the Bears tied it up in the seventh. A Redmond single, Griffith single and Mascarello single scored two, making the score 4-4. Both teams fought long and hard into extra innings, but the Buffaloes were able to score in the bottom of the 12th, leaving TMU to fall 4-5.

LEADERS
Redmond led the way offensively, going 3-5 at the plate with two runs scored. Mullanack followed, going 2-4 with one RBI while Griffith was 1-6 with one run and one RBI. Mascarello went 1-2 at the plate, tallying one RBI and one run.

GAME 2 | 1-3
In game two, the Buffaloes took another early lead, scoring one run in the bottom of the first (0-1). TMU struggled to rally together on offense, but scored their lone run of the game off a Will Ingram homerun in the top of the fifth (1-1). The Buffaloes scored two more runs in the fifth, leaving the Bears to fall 1-3.

LEADERS
Mascarello, Edwards, and Ingram were all 1-3 at the plate, while Ingram tallied one RBI and one run. Reed contributed, going 1-2 at the plate.

UP NEXT
The Bears return home to the TMU Baseball Complex for the final, non-conference matchup of the regular season against Toccoa Falls College on Tuesday, April 26. Game time is set for 5:00 p.m.