TMU Bears split with CIU behind walk-off in series finale 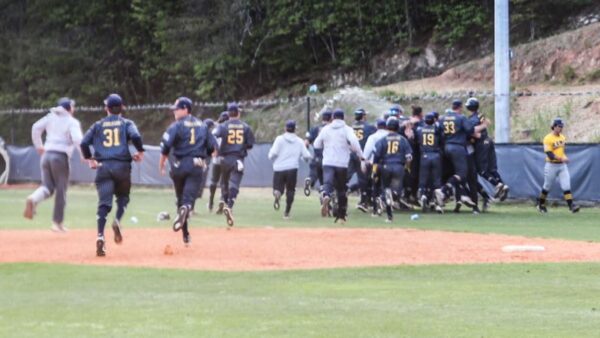 (CLEVELAND) – The Truett McConnell University baseball team recorded one win and one loss on the day in the series doubleheader against Appalachian Athletic Conference competitor Columbia International University. Game one saw the Bears fall to a score of 9-3, while game two resulted in a hard-fought win, clinched in the bottom of the seventh with a final score of 7-6. TMU is now sitting at a record of 25-18, 13-13 AAC, while the Rams fell to a record of 26-23, 14-13 AAC.

GAME ONE 3-9
The top of the second saw CIU aggressive in the box adding two runs on the board to force TMU to work from behind (0-2). The Bears were capable of getting runners in scoring position in the bottom of the second after a double to deep right by Andrew Johnston, but the Rams did not let up on defense, gaining speed on offense to collect three more runs to put TMU down by five (0-5).

A leadoff walk in the bottom of the fifth by Will Ingram sparked the inning that saw the Bears hit the board for the first time after pinch runner Ethan Roberts stole second and continued to score off a Grant McDonel single up the middle (1-5). CIU responded with three runs of their own (1-8), while TMU continued to show their grit, with a leadoff double in the bottom of the sixth by Josh Johnston, immediately followed by a Mikal Mascarello double, who proceeded to score from a sacrifice fly by Mason Gaines (3-8). The Bears ultimately could not score again as the Rams secured the game with a final score of 3-9.

LEADERS
McDonel led the way going 2-for-3 at the plate, along with an RBI, while Mascarello went 1-for-3, with one run and one RBI. J. Johnston had one hit and one run, followed by Cason King, A. Johnston and Jacob Ross who all had one hit apiece. Gaines tallied an RBI, while pitcher Brooks Rosser recorded eight strikeouts on the day, with only four hits and five runs.

GAME TWO 7-6 | MASCARELLO’S WALK-OFF
The Rams secured the lead in the top of the second, with three runs scored, but TMU lessened the lead in the bottom with a leadoff single from King, who continued to score off a sacrifice fly to right field by Ross (1-3). The Bears evened the score in the bottom of the third, with a two-run homerun over the left field fence by Mascarello, which scored A. Johnston who reached first on a fielder’s choice (3-3). The bottom of the fourth saw TMU steal the lead after Ingram reached first with a hit by pitch. Roberts entered in to pinch run and continued to advance to second on a sacrifice bunt by Ross and continued to third on a stolen base. A McDonel single to left center scored Roberts, making the score 4-3.

CIU came out swinging in the top of the seventh, taking back the lead while adding three runs on the board (4-6), but the Bears were resilient in the bottom, with McDonel in scoring position after reaching first on a walk and advancing to second from a sac bunt by Julian Galassi. J. Johnston reached first on an intentional walk and with two outs, a hard hit to the right side from A. Johnston resulted in a tied ball game after a misplayed past ball by the right fielder (6-6). With the winning run on third, Mascarello’s hit to the third baseman resulted in another misplayed ball, which scored A. Johnston, to clinch the win and avoid the AAC sweep with a score of 7-6.

LEADERS
Mascarello led the way in game two going 2-for-4, with two RBIs and one run, while A. Johnston went 1-for-3 with two runs and one RBI. J. Johnston and King individually went 1-for-3 with one run, followed by McDonel who went 1-for-2 with one RBI and one walk. Galassi had one hit, Ross had one RBI and Roberts had two runs. Pitcher Cason Brown made the start for TMU recording three strikeouts, while allowing six hits, five runs and zero walks. Jonathan Joiner earned the win after relieving Brown midway through the seventh.

UP NEXT
The Bears are back inside the TMU Baseball Complex Tuesday, April 27, where they will face No. 8 Georgia Gwinnett College in their final non-conference game of the season, with a start time at 6:00 p.m.