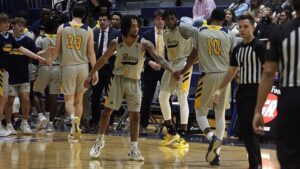 In the first half, the Bears were the first to strike with a layup from Enocka Franky. Franky followed with a dominating dunk shot, along with a shot in the paint. Shots from Raul Arias-Ortega, CJ Brown and Cory Seitz put TMU up 12-7. The Bulldogs rallied, but were unable to tie the score up. The Bears continued to put points up with a layup from Seitz, Kafunba Toure and Arias-Ortega. The Bulldogs came within one point, but back to back layups from Seitz put TMU ahead. A jumper from Franky sent the Bears into the half with a 44-41 advantage.

In the second half, the Bulldogs came out aggressive and jumped ahead of the Bears. EJ Smith retaliated with a layup to tie the game. A Smith three pointer and two layups from Franky kept the Bears in the game. Both teams continued to bounce off each other, until a three pointer from Arias-Ortega created a deficit. At the end of the half, the Bulldogs had two successful shots to send it into overtime with a score of 76-76.

In overtime, a nine point rally from the Bears gave the determining advantage. Free throws from Kafunba, Franky and Brent Kelly allowed TMU an eight point advantage, while the final free throw from Kelly gave the Bears a 93-84 victory over the Bulldogs.

The Bears return back home to the Benjamin F. Brady Arena on Saturday, January 15 to face Toccoa Falls College, with a tip-off set for 4:00 p.m.