TMU Bears fall by one on the road 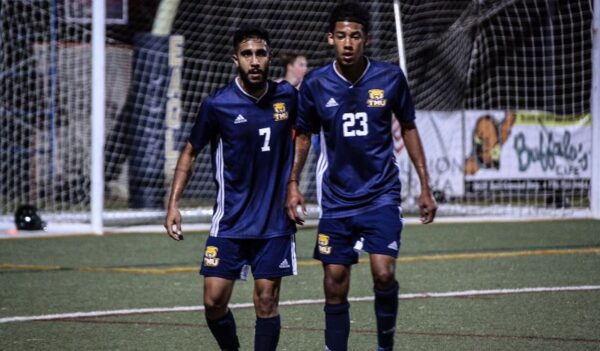 (COLUMBIA, S.C.)- In the seventh game of the regular season, the Truett McConnell University men’s soccer competed in a hard-fought game Wednesday night against Columbia International University. The Bears kept the pressure on CIU, but ultimately fell by one making the final score 4-3.

In the first seven minutes of the game, freshman Lucan Yates put TMU on the board by a header in the box, his first career goal, with an assist from fellow freshman Daniel Martin. CIU immediately retaliated with a goal of their own to tie the game in the eighth minute (1-1). The Rams dominated the remainder of the half scoring twice more in the 39th and 44th minute (3-1).

The beginning of the second half showed CIU coming out strong by scoring a fourth goal in the 52nd minute but through a great execution on a throw in, off a headed pass from Yates, freshman Justin Hicks scored off a shot to the right corner in the 62nd minute, his first career goal as well, making the score 4-2. TMU gained speed by taking three more shots and in the 73rd minute, sophomore Zayne Moore, after battling a blocked first shot, pushed another goal across to put the Bears only one away from bridging the gap (4-3). TMU took five more shots but ultimately fell to CIU by one.

Yates led the Bears individually with six shots, five on goal, along with Hicks who individually had three shots, three on goal. Sophomore Austin Moreland tallied two shots, one on goal, while freshman Faith-Loic Djidjonou and Moore had a shot a piece. Freshman goalie Chandler Bond made his debut as a Bear with eight saves on the night.

Catch men’s soccer Saturday, October 17, at the TMU Soccer/Lacrosse Complex as they face Milligan College with a kickoff time of 7:00 p.m.