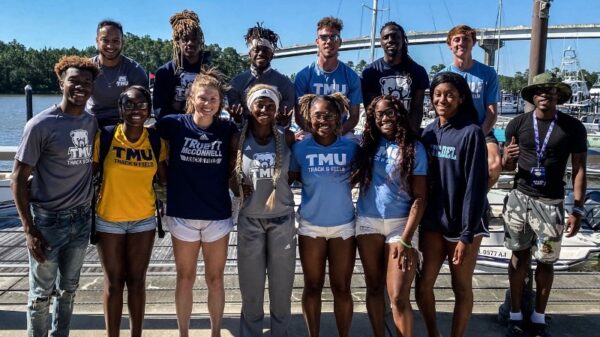 The Truett McConnell University men’s and women’s track & field team concluded their 2022 season after competing in the NAIA National Championships Wednesday-Friday at the Mickey Miller Blackwell Stadium, where TMU qualified in 13 total events, the most to ever qualify in a single season in program history.

“Nationals always has its ups and downs, and this year was no different,” said Head Coach Joe Imhoff. “There were more Truett athletes competing this year than in TMU Track and Field history and I am proud of their hard work and accomplishments.”

“Freshman Myesha Hall came in first place in Long Jump at nationals with a PR and school record of 6.15m making her the first-ever first-place national finisher in TMU Track and Field history. Congratulations to everyone who made it and competed hard and I’m already looking forward to the 2022-2023 season.”

Most notable, Myesha Hall became the first-ever track and field athlete to be crowned a national champion after finishing first overall in the Women’s Long Jump with a mark of 6.15. Hall was seen competing in the triple jump as well, finishing 16th overall with a mark of 11.72.

Sara Sullivan is the Director of Athletic Marketing and Communications for the Truett McConnell University Bears.