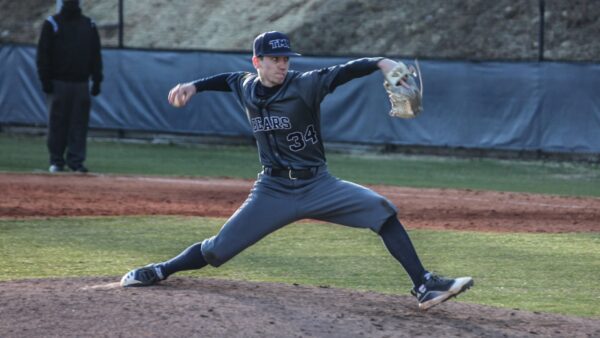 (LAWRENCEVILLE) – The Truett McConnell University baseball team split the final day of the Grizzly Open with a 9-6 win over Lourdes University and 20-3 loss against No. 3 Georgia Gwinnett College on Saturday. The split put the Bears at 7-4, 0-0 AAC on the year, while the Gray Wolves fell to 0-1, 0-0 WHAC and the Grizzlies improve to 6-2, 0-0 AII.

GAME ONE 9-6
A Devyn Munroe triple to deep center field put the Bears up on the board first (1-0) in the bottom of the first. Munroe scored once more for TMU in the first on Andrew Johnston’s batted ball to give the Bears a two-run lead early (2-0). After holding Lourdes scoreless once again, Mason Gaines hit a two-out single to left-center to fuel another two-run inning for TMU in the bottom of the second. Gaines went on to score on Tanner Griffith’s single to third (3-0), and freshman Mikal Mascarello ran home on a passed ball (4-0). The Gray Wolves, however, answered with four runs of their own at the top of the third (4-4).

After a leadoff walk by Cason King, Mascarello drove home King with a single up the middle to put the Bears back out front for good (5-4). Another Mascarello single scored pinch runner Jacob Ross (6-4) in the bottom of the seventh, and Lourdes was only capable of answering with one run in the top of the eight (6-5). A leadoff Josh Johnston triple to deep right field sparked a strong three-run inning for the Bears, which proved to put the game out of reach (9-5). Lourdes added one more run at the top of ninth (9-6), but it was not enough as TMU clinched their first win of the Grizzly Open by four.

LEADERS
Mascarello led the way going 3-for-4 with three RBIs, one walk and one run. Gaines went 2-for-3, including a double, with one run and one walk. J. Johnston and Munroe each went 2-for-4 with two runs, a triple and a run. Munroe had two RBIs. Griffith also tallied two hits and an RBI.

Cason Brown picked up his first win of the season after throwing seven innings of five hits, four runs, two walks and eight strikeouts. C.J. Thomas and Jacob Adams each relieved for an inning.

GAME TWO 3-20
The nationally-ranked Grizzlies got off to a hot start scoring seven runs off of eight hits and a defensive error (0-7) in the first, which proved to steal all of TMU’s momentum. Despite falling behind by 13, a Russell Kiser single scored two runs for the Bears at the top of the sixth (13-2). J. Johnston also homered to right on a 2-1 count in the top of the seventh (20-3), but it proved not enough.

LEADERS
Sam Odiorne was perfect at the plate (2-for-2) with a run, while Kiser led with two RBIs. J. Johnston, Grant McDonel, A. Johnston, and Gaines all added a hit apiece. Junior Brooks Rosser made the start for TMU, while Andrew Fry, Miller McCathren, Jonathan Joiner, Jonathan Williams, John James and Zachary Coots also saw action from TMU’s bullpen.

UP NEXT
The Bears will return home to the TMU Baseball Complex on Tuesday, Feb. 23, at 3:00 p.m., to host Montreat College before their Appalachian Athletic Conference series opener Friday, Feb. 26 – Saturday, Feb. 27 against Milligan University.