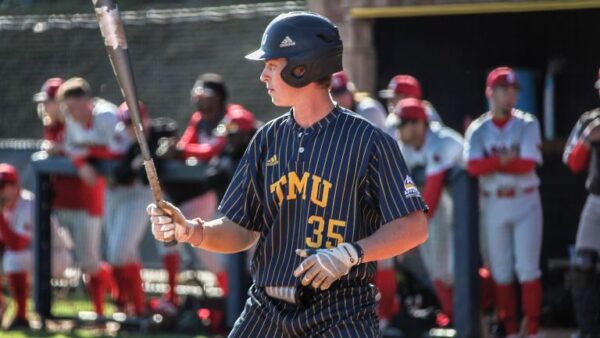 (CLEVELAND) – The Truett McConnell University baseball team secured a complete Appalachian Athletic Conference series sweep over No. 13 Bryan College on Saturday afternoon in games two and three of the series (8-6, 7-3). TMU defeated the Lions in dominating fashion on Friday in game one 15-5. The wins improved TMU to 16-14, 6-9 AAC on the season, while the Lions fell to 22-11, 9-8 AAC.

GAME ONE 8-6
Bryan got up on the board first at the top of the first on a sacrifice fly (0-1), but Devyn Munroe led off the bottom half with a hit by pitch and went on to score on a Bryan wild throw to make it even (1-1). Josh Johnston sent the Bears ahead for good in the second with a single to shallow center field (2-1) and the bottom of the third saw TMU put up two more runs on a Will Ingram single to shallow center (4-1). The Bears went on to record another explosive inning, which was fueled by a J. Johnston’s double that scored Munroe (5-1). J. Johnston ran home on Mikal Mascarello’s single up the middle (6-1), Mason Gaines hit a sacrifice fly to center to drive home Mascarello (7-1) and Tanner Griffith doubled through the hole at shortstop to give TMU a seven-run lead (8-1).

The Lions rallied in the sixth to get back within two after scoring five runs off of four hits (8-6), but it proved not enough as the Bears held off the Lions just enough to finish the first game with an 8-6 win.

Sophomore pitcher Andrew Fry made the start for TMU and earned the win after throwing 5.2 innings of eight hits, three runs and five walks. Cason Brown and Craig Barton both relieved.

GAME TWO 7-3
TMU’s winning momentum proved to carry over into the second game as they recorded a total of five runs, to Bryan’s zero, in the first and second innings. King singled to score J. Johnston (1-0), Gaines singled to score Mascarello and King (3-0), Kodi Bishop singled to score Griffith (4-0) and Bishop scored on A. Johnston’s walk (5-0). The Lions scored two runs of their own in the third and another in the fourth, but TMU also added one run in each inning to maintain the lead, ultimately clinching the complete sweep with a final score of 7-3.

UP NEXT
The Bears will travel to Union College on Wednesday, Apr. 7, before hitting the road for Kentucky Christian University on Friday, Apr. 9 – Saturday, Apr. 10.