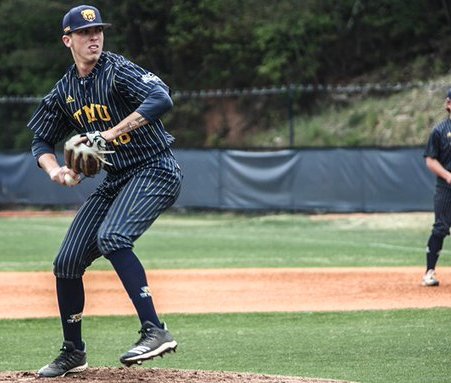 (CLEVELAND) – After losing 8-3 in game one to No. 25 Reinhardt University, the Truett McConnell University baseball team shutout the Eagles (6-0) to split the three-game Appalachian Athletic Conference series doubleheader at the TMU Baseball Complex. The split put TMU at 26-20, 14-14 AAC on the season, while the Eagles sit at 30-17, 16-12 AAC.

GAME ONE 3-8
The Bears had an opportunity to get up on the board first in the bottom of the third with runners on second and third, but both were left stranded. Reinhardt got out front for good in the fifth with three unanswered runs (0-3) and added four more in the seventh (0-7) before TMU scored their first run of the twin bill in the bottom of the eighth. After Julian Galassi singled up the middle, Galassi ran home on Will Ingram’s ground out (1-7), while Josh Johnston’s single to short drove home Grant McDonel (2-7). The ninth inning saw Reinhart score once more (2-8) before TMU’s Andrew Johnston homered over the right field fence (3-8), but it proved not enough.

LEADERS
Overall, both teams accounted for a total of seven hits. The Bears were led by Tanner Griffith who went 2-for-3, while A. Johnston went 2-for-4 with one run and one RBI. Galassi went 1-for-2 with one run, while J. Johnston and Mikal Mascarello added one hit apiece.

GAME TWO SHUTOUT 6-0
After three and a half scoreless innings, Mascarello smacked his fifth homerun of the season over the left field fence (1-0). A. Johnston followed up with a walk, advanced to third on a wild pitch and scored on Cason King’s single to left (2-0). The bottom of the fifth, however, saw A. Johnston hit a grand slam (7-0), ultimately proving to put the game out of reach for the Eagles, while Brooks Rosser, backed up by stellar defense, continued to hold Reinhardt scoreless to split the twin bill.

LEADERS
TMU recorded a total of eight hits, while Reinhart had three. A. Johnston led the Bears with four RBIs (1-for-2) and two runs. Mascarello also went 1-for-2 with two runs and one RBI, while Griffith went 1-for-2 with one run. Mason Gaines went 2-for-3 and Galassi, King and Munroe added one hit apiece.

UP NEXT
The Bears will face the Eagles once more at the TMU Baseball Complex on Friday, April 30, at 5:00 p.m. Both teams will battle for the series win, which is the final AAC series of the season for both teams.