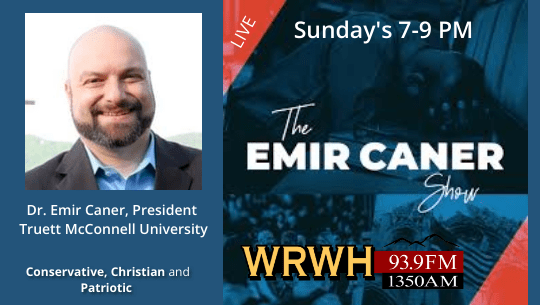 Building on five years of co-hosting radio programs in Georgia, he is now the host of the new syndicated program, “The Emir Caner Show.”

Dr. Caner, who earned the Doctorate in History from the University of Texas at Arlington, has published or contributed to 24 books that have sold more than 300,000 copies and have been translated into a dozen languages.

His bestseller, Unveiling Islam, won the Gold Medallion Book of the Year award.

Over the past twenty years, Dr. Caner has preached in nearly 1000 churches and conferences in twenty countries.

His wife, Hana, was raised under the oppression of Communism and speaks on the ills of socialism and communism.

His slogan is also his life’s motto: “Truth is Immortal”

The Emir Caner Show is a two-hour, live call-in show hosted by a former Muslim who stands unapologetically for a conservative, Christian, and patriotic worldview.