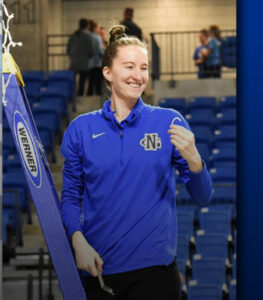 (DAHLONEGA) – University of North Georgia women’s basketball head coach Buffie Burson has announced that former graduate assistant Amber Skidgel has been promoted to a full-time position as an assistant coach.

Skidgel just concluded her second season as a graduate assistant for the women’s basketball program after a decorated career in a Nighthawk uniform.

“It was an easy decision to promote Amber to full-time,” stated Burson. “She understands and lives our culture daily and has a relentless work ethic. It is also wonderful to keep a former player on staff that bleeds North Georgia blue.”

In her two years on the bench, the Nighthawks have earned a pair of NCAA postseason appearances including a program-best NCAA Championship semifinal appearance this past year. The Nighthawks totaled a 47-6 record and a pair of Peach Belt Conference championships since Skidgel has joined the coaching ranks.

The Bethlehem, Georgia, native is second in program history in career threes made while holding the top spot for threes made in a single season, knocking down 81 in her senior campaign.

In addition to her accolades on the court, Skidgel was a three-time PBC Presidential Honor Roll Bronze Scholar and a two-time PBC All-Academic Team member.