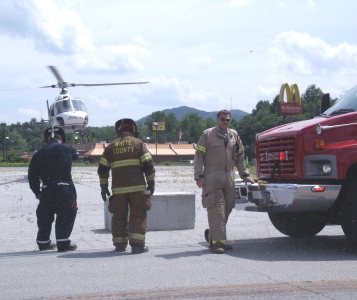 Cleveland Fire Chief Ricky Pruitt said the patient had been dismissed from the hospital earlier  in the day  and started having more symptoms, so they called the doctor who advised them to get to the hospital in 20 minutes or less.    Chief  Pruitt said time was big factor in this case.   “ The helicopter was here within nine minutes from request time and the ETA to Erlanger is 22-24 minutes, that would get him there and stabilized for treatment, which still falls in the golden hour of treatment, “ Said Pruitt.

Cleveland Fire Department personnel set up a landing zone in the same lot, next to Cleveland City Hall, that was used Thursday for a burn victim.  Cleveland Police Department blocked traffic on Underwood  Street while the medical shuttle between ground ambulance and helicopter.

The patient reportedly requested to be transported to  the Chattanooga facility.