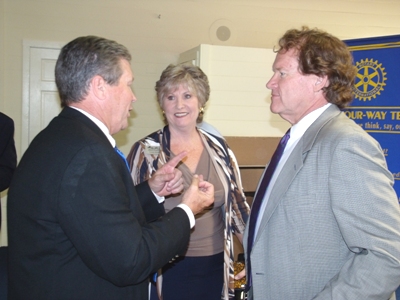 The White County Rotary Club  heard a report on the state of the economy for the state as well as in White County Tuesday.    Frank Norton, Jr. Chairman and CEO  of The Norton Agency  was the featured speaker  his agency  includes 63 associated business and manage investor assets in excess of $200-million dollars.

After he shared with the group has family ties to White Count  he said the state and White County has a way to go to recovery from the recent economic downturn.  As for White County Norton said,  it’s not going to be business as it used to be.  He said, “ the way I view this the market has  changed  and we are involving, we’re not going to be like we were in 2004 and five with a frenzy market we’re moving to a normality.”

One of the big obstacles he sees in the recovery efforts the for the government to unshackle local banks and allow them to lend money to investors.  He also said the building industry was almost wiped out and now we have to rebuild that industry.

Norton told the Rotarians that White County has got a lot of good things going for it.  He said we need to invest in our community and not let people from  Atlanta or other areas take advantage of what we have here.