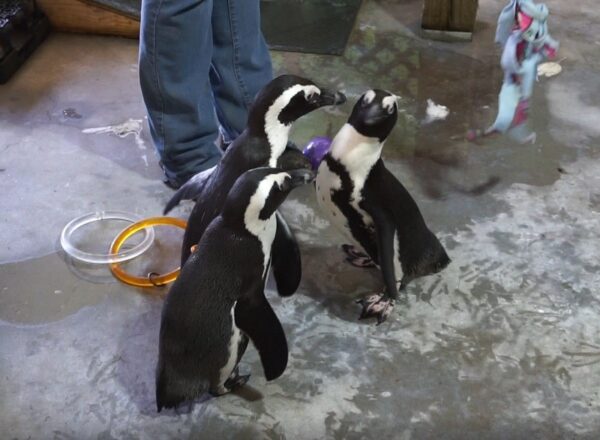 (Cleveland)- Four penguins have moved into the North Georgia Zoo and Wildlife Safari in Cleveland, making the zoo only the second in the state where visitors can find the flightless birds.

Mabel, Beans, Mark and Oyster are in a temporary habitat at the zoo while a brand new feature is built for them. The only other place in Georgia with a home for penguins is the Georgia Aquarium.

Owner Hope Bennett explained the penguins are from South Africa, known as African, Blackfoot or Jackass penguins. Since they are from a warmer climate in the wild, they can stand the warmer temperatures in Georgia. In fact, the penguins were getting extra heat this week since the weather was cooler.

The penguins are playful, love collecting things for their nests and are attracted to anything shiny or that dangles. Melissa Burns, director of animal care, said Mabel and Beans have become a mating pair, and the two are busy trying to find things to build the perfect nest.

“Beans and Mark had a little competition for Mabel the penguin, and Beans won,” said Burns. “So we have our couple; Mark, who is our bachelor; and then we have Oyster, who is only nine months old, so she’s our youngest penguin.”

Bennett said they have a special design planned for the penguins’ new home.

“There’s going to be a walk-in area so you can see them swimming,” said Bennett. “The front area will all be the swimming area, the back area will all be for when it gets colder, we can still do our encounters back there, and they’ll be able to come in and out. We’ll have a little beach area and swim area.”

Bennett said the penguins are asking for sponsorships so their new home can be built. There are three levels, starting at $250. More information about sponsorships and what each package includes can be found here.

Ahead of the finished habitat and penguin experiences starting, a livestream of the whole penguin crew is set for National Penguin Day, or Wednesday, and behind the scenes encounters are scheduled to start on January 23 and January 30.

The Wildlife Park is working in conjunction with the African Sea Bird Sanctuary to care for the penguins.