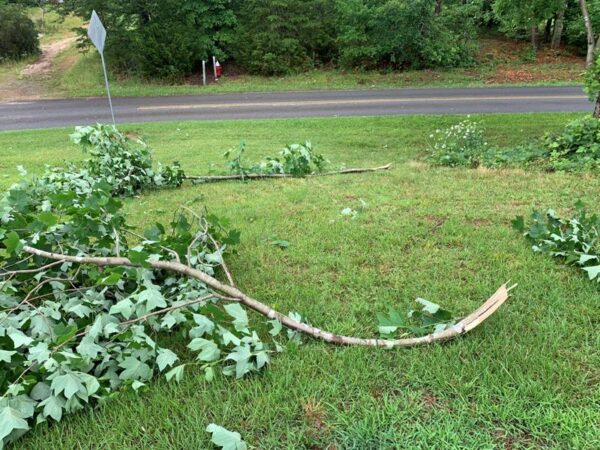 Tree limbs down along Head Street in Cleveland

(Sautee)- A few trees or tree limbs were blown down Tuesday during a noontime weather system that hit White County.

WRWH’s Weather Reporter Bill Kinsland was one of those who had to deal with the down power lines and power outages until the evening hours. Other areas like downtown Cleveland saw heavy rain, lightning, and hail.

Kinsland said it was phenomenal the storm was probably a microburst in which a tall column of very cold air came straight over the Blue Ridge Divide and literally collapsed over White County with a huge down rush of cold air causing sudden high winds and that incredible temperature drop…..and major rainfall that accompanied it. Kinsland said, “Basically it was the final stage of a big thunderstorm in which the column of cold air is so heavy that it literally collapses…we call that “subsidence.”

The temperature dropped 21 degrees in one hour at the Kelley Road weather station, 18 degrees in just 20 minutes here at WRWH, and 12 degrees in an hour in Helen.

White County Public Safety Director David Murphy said no major issues were reported as a result of the storm.