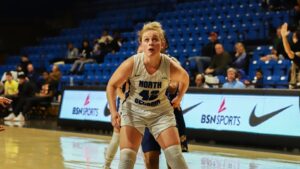 (MORROW, Ga. )- Julianne Sutton led all scorers and secured a double-double as the No. 8 University of North Georgia women’s basketball team took down Clayton State Wednesday, 70-61.

Trailing by two at the half, 34-32, the Nighthawks came out of the locker room and went on a 9-0 run midway through the third period to take the lead for good. UNG finished the third quarter scoring the last six points of the quarter and kept the lead north of six points throughout the final 10 minutes.

NOTES
– Sutton scored 18 points and pulled down 12 rebounds to lead four Nighthawks in double figures. Josie Earnhardt and Caroline Martin each scored 15, while Abbie Franklin was a board short of a double-double, netting 12 points on the night.

– North Georgia was 11-for-25 from behind the three-point line.

– The Nighthawks have now won 10 of the last 11 games against Clayton State.

NEXT UP
UNG hits the road again on Saturday as they will take on Georgia College. Tipoff is slated for 1:30 p.m.