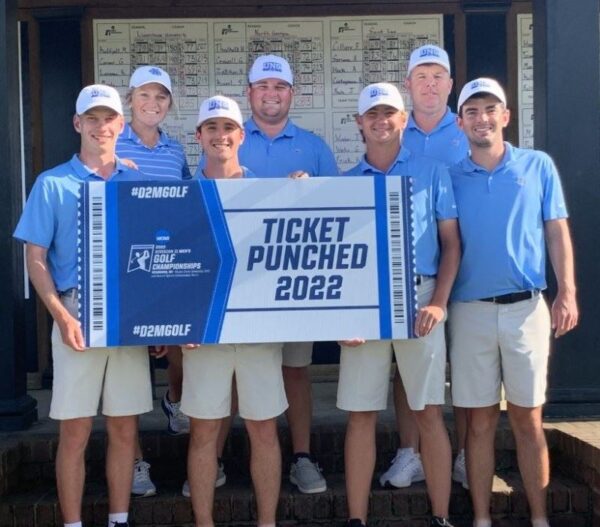 (VALDOSTA, Ga. )– For the first time in program history, the No. 8 University of North Georgia men’s golf team is headed to the national championship after finishing in a tie for third at the NCAA Division II South/Southeast Regional Saturday.

“I’m incredibly proud of these guys for qualifying out of the toughest region in the country and for earning the opportunity to compete for a National Championship in Detroit,” said head men’s golf coach Bryson Worley. “Coming from behind and shooting the low round of the day in today’s conditions is a small representation of their championship mindset and their ability to handle the pressure.”

The Nighthawks finished tied with Lee in the team leaderboard, three shots back of Barry in second. Limestone won by 10 shots, while Georgia Southwestern and Florida Southern were the last two teams to earn spots in Detroit. West Georgia’s Austin Fulton and King’s Samuel Trueba earned individual spots in the national championship.

Individually, Evan Thompson finished in a four way tie for third place at 6-under, while Stephen Kinsel climbed 40 spots on the leaderboard with a final round 6-under 66 to finish one shot behind Thompson in solo seventh. Barry’s A.J. Ewart won the tournament, firing a 13-under score for the 54 hole tournament.

North Georgia will now turn their attention to TPC Michigan and the NCAA Division II National Championship May 16-20.